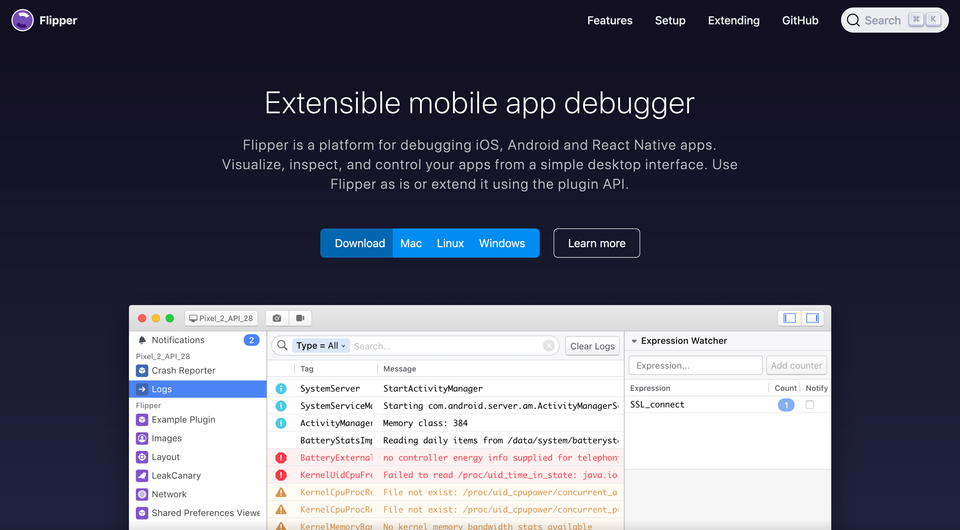 Flipper is a debugging tool build by facebook, which in a sense is a spiritual successor to Stetho. For those who don’t know, Stetho is also a debugging tool, which allows Android apps to redirect a bunch of debugging data to chrome://inspect, most notably networking requests. I have used Stetho quite extensively in one of my last companies, because how easy it is to setup and use, so I do have some fond memory of it. However, slowly and gradually, it stops being maintain, and then I found out the existence of Flipper. So obviously the next logical step is to give it a shot, and see how useful it is 👀👀

The process is actually quite straight forward, thanks to the pretty extensive-yet-not-too-verbose documentation site. The only hurdle I ran into is when setting up the networking plugin, you have to make sure you have the same instance of the plugin use by both the interceptor, and the setup step. I messed up some setup in Dagger, and it took me like a solid 30 minutes before I really how stupid I was 🤦‍♀

So the biggest selling point of Flipper is probably it’s plugin API. It opens the door to build project-specific and user-friendly GUI dev tools.

In a lot of projects, probably at some point someone will think “hmm, what if I just wrote a script to make it easier to debug this?”, and then they hack the script together in record breaking time (because it’s usually the fun part), and tell the entire team “now your problem is solved”. But when team grow/change, suddenly everyone is relying on that script with little to no test, often convoluted code, and even more confusing and cryptic inputs/outputs (and stacktrace if something went terribly wrong).

So these are the problems that I hope Flipper can solve/mitigate:

So with these goal in mind, here’s what I have learned:

Currently it is entirely still an experiment, and also I have not asked my boss if I can even share it. I hope in a month or 2, I will be able to share if Flipper turns out to be a good idea or not.

And to end this blog post, I just want to do a quick shout-out to the 1.1x/+10% engineer concept. What I have started to realized that I like to do is to “help other people do what they are good at, but even better”, and I think more people should give it a shot. Imagine if every month, 1 of the engineers build/do something that makes everyone works 10% more efficient/more productive/happier, in 2 years, 1.1²⁴ = 9.85, i.e. the team will be almost 10 times better than 2 years ago! And I am 1000% sure you cannot simulate these kind of growth just by hiring more people/“10x” engineers.

At the end of the day, I hope Flipper will allow me to make our team 10% more efficient, and so far it looks promising, and I recommend you to give it a shot!